skip to main | skip to sidebar

I Feared for My LIfe 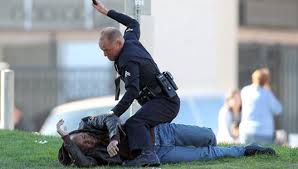 "I feared for my life,” is the tired phrase some of these rogue and out of control racist cops use to justify killing black boys and men.  In Chicago, a young guy was shot down over a year old because he was carrying a three-inch knife.  A police car pulled up in within 6 seconds of the officer stepping out of his cruiser; he shot the teenager 16 times.  Two of those bullets in his back.  Tomorrow the video is being released as the result of a reporter.

The boy’s parents received 5 million dollars although the state/police department admitted no wrong.  The parents didn't want the video released.  Chicago is already in dire trouble with crime and murders and releasing this graphic video of a white man clearly murdering a teen will probably cause riots.  If they had not planned to release the video, the cop would still be out of jail and not charged with a crime.  But because it will be released, he was arrested with no bail today.  I'm so tired of our men being shot down like animals.  Rioting and burning down cities haven't stopped one thing.  We must figure out how to stop this mess.  I recommend:


Nothing is going to change these racist cops from thinking they can continue to get away with murder, but hitting them in the pockets and taking their badges.

Racism causes many problems and cops should not be racist. They are for the safety of the citizens regardless of their race, not for their harm. Such cops should be punished.

I totally agree and hope that this changes. Cops are supposed to be protectors and not the criminals.

Rose
I am an author and newspaper columnist. I love writing in all forms. I have been married 24 years and have one daughter. I have written five books but I'm most proud of "Backroom Confessions" and "A Hole in My Heart". I co authored "A Hole in My Heart" with my then fourteen year old nephew. Although I work full time I also own two companies, one is a non-profit organization and the other is a for profit business.